Left Right
About Us 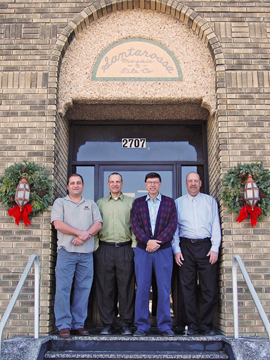 The story of WWI Vet, Domenic M. Santarossa, who founded Santarossa Mosaic & Tile, is not unlike the stories of many European immigrants who came to America through Ellis Island in the early 20th century.

Santarossa had left his native Italy at the age of 13 to study the terrazzo and mosaic trade in Bremen Germany, and in 1913, he arrived in the United States at the age of 20 to build his future.

In 1920, he settled in Indianapolis and, a year later, moved his business into the building the firm still occupies on the city's east side. Joining with Louis Toffolo, his partner and lifelong friend, they incorporated in 1924.

Constance "Connie" Toffolo (Louis' nephew) and Carlo Toffolo (Louis' son) later joined the organization. Domenic's son Mario joined the business in 1948 after completing training as an architect at Notre Dame, and today, a third generation of the Santarossa family continues to work at the company, following in the tradition of excellence set forth by Domenic Santarossa over 85 years ago.

By the early 1970s, marble, granite, and other natural stone materials were added, and in the mid-‘80s vinyl, carpet, and wood flooring were offered. By the ’90s, terrazzo experienced a rebirth as architects, designers and builders rediscovered the floorings beauty, durability, and versatility for both commercial and residential applications. Today, Santarossa carries the largest inventory of exotic stones in the Midwest, with more than 4,000 slabs of material on hand for both residential and commercial installations. Our craftsmanship is featured in homes, schools, and buildings across Central Indiana and the Midwest.